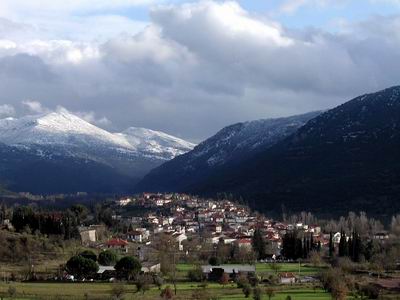 Kleitoria (or Mazeika) is the base of the Municipality of Lefkasios and it has circa 1000 residents. It is located on the SE end of the Prefecture of Achaia at an altitude of 520 metres, in the area of the mountain of Helmos, which is rich in vegetation and water. Kleitoria follows the typical architectural style of the main Peloponnese. Various small industry, folklore and architectural buildings are still in existence, such as old churches-most of them stone built- arched bridges since the Turkish occupation, traditional springs, old pensions and watermills, of which very few are still in function.

The residents, nowadays, are occupied in stockbreeding, trade, textile industry and the agricultural exploitation of the valley of the Aroanios river , which crosses the area that has recently been redistributed.

There is a unit of biological cleaning and a private hydroelectric station of electric power in the area as well.

Lake of the Caves 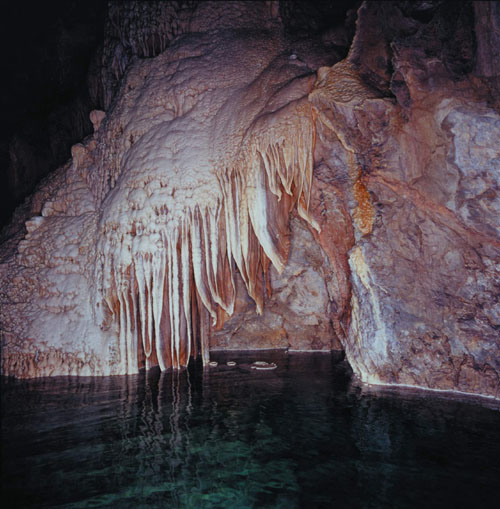 The ?Lake of the Caves? is located near the village of Kastria of the municipality of Lefkasi in Achaia, on the rural road between Patras-Kalavryta ?Kleitoria-Tripolis. It is only 17km from Kalavryta and 9 km from Kleitoria.

It was discovered in 1964 by the residents of Kastria with the aid of Vasilios Tembelis and it was explored by the Hellenic Association of Mountain climbing a year later. Complexes of stalagmites and stalactites are mirrored on the water of the lakes.

The cave is a rare creation of nature. Apart from the labyrinths, the mysterious galleries and the strange stalactite formations, it has something unique: the successive escalating lakes (on three floors) make it the only one of its kind in the world!

The ?Lake of the Caves? is an old band of an underground river with an explored length of 1980m. When the snow melts, the cave is transformed into an underground river with natural waterfalls. During the summer months, a part of the cave dries and original lacey stony basins and 4-metre damps surface. The rest of the cave always has water in 13 picturesque lakes. Its walls are decorated with colorful complexes of stalagmites and stalactites, whereas from the high (up to 30m) ceilings hang ?chandeliers?, ?medusas?, and ?curtains? with beautiful ruffles. Their reflections on the tranquil water of the lakes astonish the visitors. 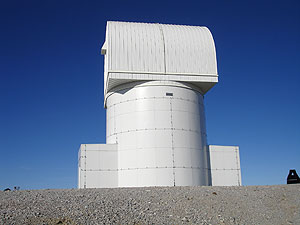 The telescope of the National Observatory, named Aristarchos, is the biggest telescope of the Balkans and the second biggest of Continental Europe, which is located on the top Neraidorachi of the mount Helmos at 2340m. It took its name in honour of the ancient Greek astronomer Aristarchos. 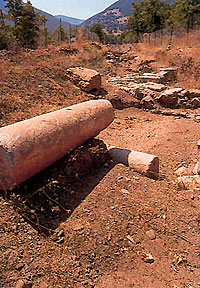 At a very close distance from Kleitoria lie the ruins of the Ancient Kleitor. The area originates from the city-state of Kleitor, who, according to Pausanias, was the most powerful of the kings. Kleitor was the first city of the Arcadian federation that produced money. The fact that Kleitor was one of the richest, most powerful and most formal Arcadian cities between 1600 B.C. and 395 A.D., with residents of high educational level, is proven by the evidence that are still in existence and the findings of the excavations. The grandeur of the place can be felt by the visitor while walking through the archaeological site of such natural beauty. Apart from the ancient theatre, many tombstones, scriptures on stones and coins have been found. Theatrical performances of ancient tragedies are given there every summer. 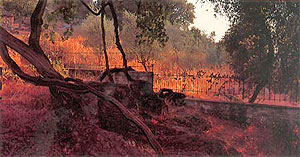 Near Pagrati and parallel to the road to Kleitoria, lies Klema(=vine). It is about a vine that occupies massive space. Traveller Pausanias mentions it in ?Arcadian? as a ?bizarre phenomenon?. Myths connect it to the labours of Hercules. It is estimated, thus, that may be over 3000 years old. It has been listed as a scheduled monument of nature.

Near the village of Planetero, in the plane tree forest, springs the Aroanios River. It is formed, in the area of the villages of Planetero and Arbouna, from the waters of the Feneos basin that come here from various water pools. It is reinforced by the smaller streams of Lagatha and Haliki kai flows south until it meets the Lathonas River. Its length is about 10km.

Also, the area is known as a trout fishery.

The springs of the Aroanios River in the Planetero village and the forest combined with the offer of food are only some of the attractive traits that make it a place worth visiting. 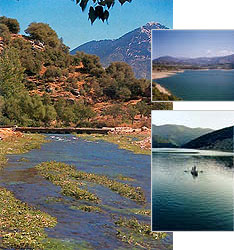 Ladonas River is one of the oldest and most praised and worshiped like a river god of the Peloponnese. Its name is mentioned countless times in the Greek mythology as a place of meeting and conflict between gods and people. It is over 60km long. Its original section is located in the Prefecture of Achaia and the rest in the Prefecture of Arcadia. At the area of Dafni there is a damp and an artificial lake. As it was recently proven, the spring of Ladonas is supplied with water by an underground river. Countless legends, from the antiquity until today, create an astonishing aesthetic and psychological feeling to the visitors. 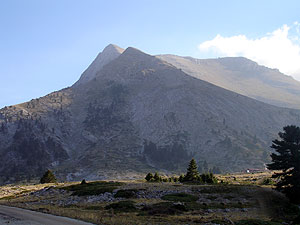 It is one of the two most important paths that have been formed in Europe, which literally runs through the Municipality of Lefkasi. It originates at the Pyrenees and, through Europe, comes to Greece going through the mountains (Pindos, etc.), the Continental Greece and the Peloponnese (Ag. Nikolaos-Aegion) down to Gytheion, reaching and going through Crete via the sea. As far as this specific area is concerned, the path starts at Diakopto, following the gorge of Voraikos, reaches Kalavryta, continues to Kato Lousous-Planetero-Arbouna-Ag. Nikolaos-Tourlada-Krinofyta. It is a magnificent route in nature that should not be missed. 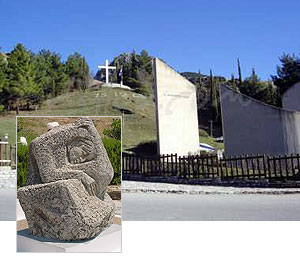 One of the unforgettable monuments of the city and the Holy Pilgrimage is the Place of Sacrifice, on the hill of Kapi, which lies east of the city of Kalavryta (500m from the centre) on the way to the ski resort.

At the side of the catacomb is located the stony sculpture of the Hurting Mother, the emblem of the Municipality and symbol of the human patience crafted by then student of the Aesthetic Arts School Anna Vafia. It symbolizes the women-heroines of Kalavryta (Mother, Sister, Grandmother, and Daughter) who painstakingly fought to reestablish the ruined city. 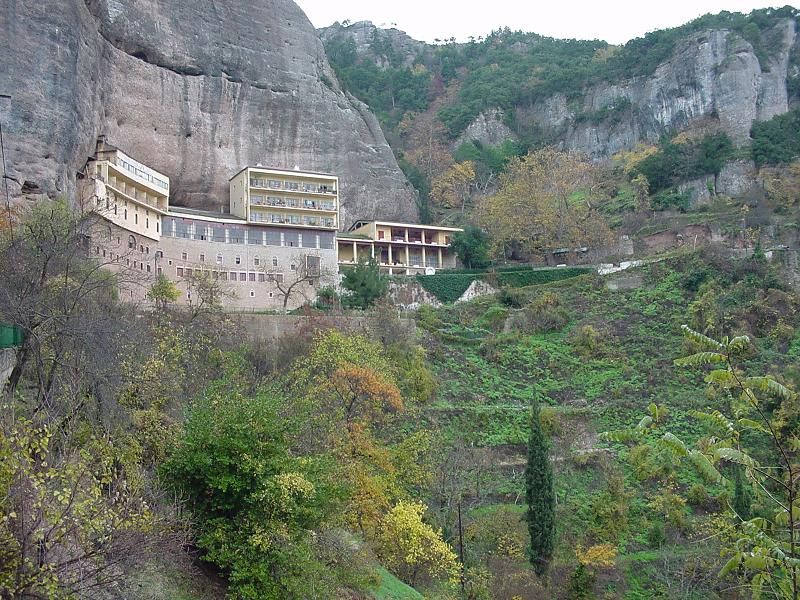 The Holy Monastery of Mega Spilaion is at the 10th kilometer on the highway between Kalavryta-Pounta-Patra-Athens.

It is built on an impressive location at the entrance of a natural cave.

It was built in the year 362 by the Thessalonian monks, Symeon and Theodoros.

The monastery of the Mega Spilaion has been a beacon of the Orthodox faith and a fortress against the Turk invaders. It was attacked many times but was never conquered. It was destroyed by fire four times, in 840, 1400,1640 and 1934 and yet the icon of the Virgin Mary was left intact. During the attack of the Turkish leader Ibrahim in June 1827, the heroic Father Superior of the monastery replied: ??it is impossible for us to kneel before a conqueror ? if you come here to fight and beat us, it is not a grave thing, for you will beat priests, but if you are beaten ? you will be shamed??.

In the horrific December of 1943, the Nazi army, on the 8th of that month, looted, burned and executed 16 people, monks, visitors, and workers. They also executed 9 monks at the location Psilos Stavros (= high cross).

Despite the destructions, the fire and the looting, the monastery of Mega Spilaion rose even better and dominant. Today, it rises 8 floors above the ground continuing its historic spiritual history.

Municipal Museum of the Holocaust in Kalavryta 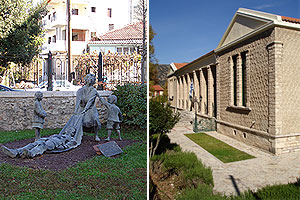 One of the most historic Monuments of the city is the Municipal Museum of the Holocaust in Kalavryta.

This historic and tortured place is closely linked with the event that took place during the German Occupation and mostly with the horrific tragedy of the 13th December 1943- the Black Monday of Kalavryta, which shocked and continues to shock the civilized world.

This symbolic building was destined to be the stage where the first act of the drama of Kalavryta took place. Here, the residents of the city of Kalavryta got to know and suffered the cruelty of the Nazi barbarity: they were lead there on false pretext, separated from their families and had the women and children imprisoned and extracted. 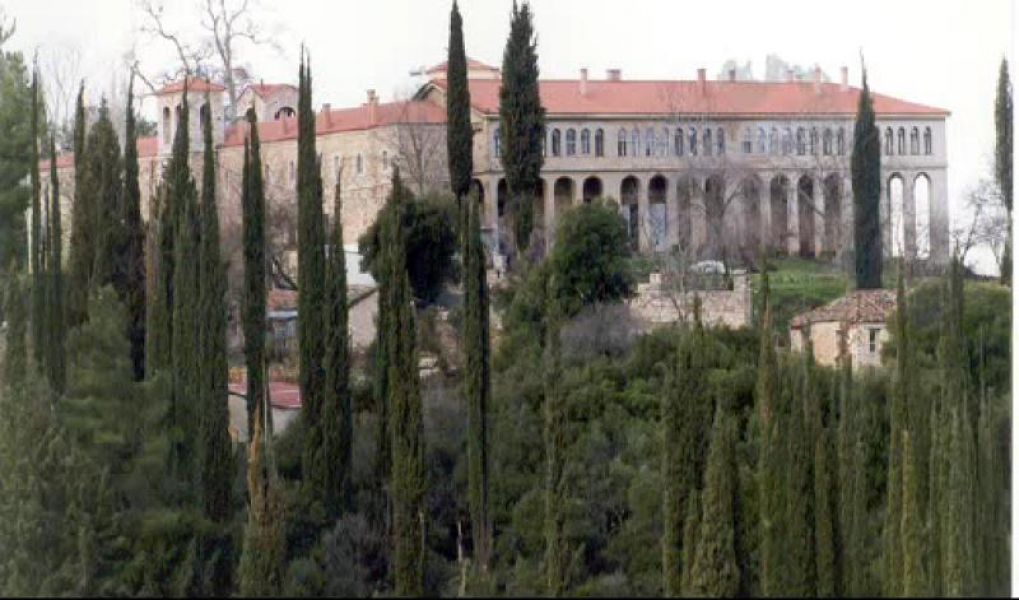 The Holy Monastery of Aghia Lavra is located 5km SW of the city of Kalavryta.

According to legend and the existing evidence, the history of the monastery begins in the years of the emperor Nikiforos Fokas. The monastery was founded by the ascetic monk Eugenios who came from the Mount Athos. Its construction started in 961 at the area of Palaiomonastiro. With the passing of time, it acquired material resources and monks. Thus, in a short time, there were 960 monks living there. During the Turkish Occupation, it was a centre of the National Action. 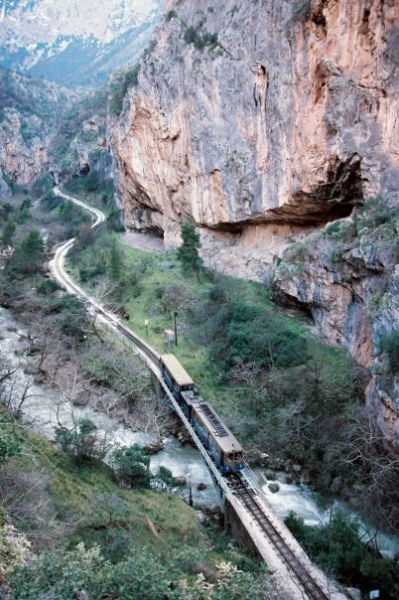 The trip by the cog railway is the most spectacular of the Balkans, and resembles the trails of the Swiss Alps. Starting at Diakopto and after passing through the metal or stone bridges and tunnels, valleys and mountain formations, ending in Kalavrita

The Rack is one of the main tourist attraction in the area retaining its original value and unique technical infrastructure (open and closed tunnels carved into the rock, bridges, arches, buildings, power stations) and a big part of passing the impressive gorge Vouraikos River. The track is the narrowest in Europe (0.75 m). Today, the train, equipped with two small wagons, leaves the station of Diakopto climbing to Kalavryta and enters the first narrowing of the gorge leading to the station of Niamata.

The railway runs through small tunnels where, among the small openings, the visitors have time to see the other side of a large rock shelter with successive cavernous rooms where the stalactites have formed upright columns that resemble forms of a court (judge, prosecutor and president).

The route continues in wild landscapes with waterfalls and reaches the closest point on the route called "Doors" where the train goes through a tunnel. Going up the cog sinks its teeth into the track and reaches the station of the Great Cave located in the village of Lower Zachloro. Continuing now the normal route to Kalavrita, it speeds up passing from its station in Kerpini and reaches the city through the open plains.

Information and Photos from: the website of the Municipality of Kalavryta, Centre of Environmental Education and Greek Tourism.